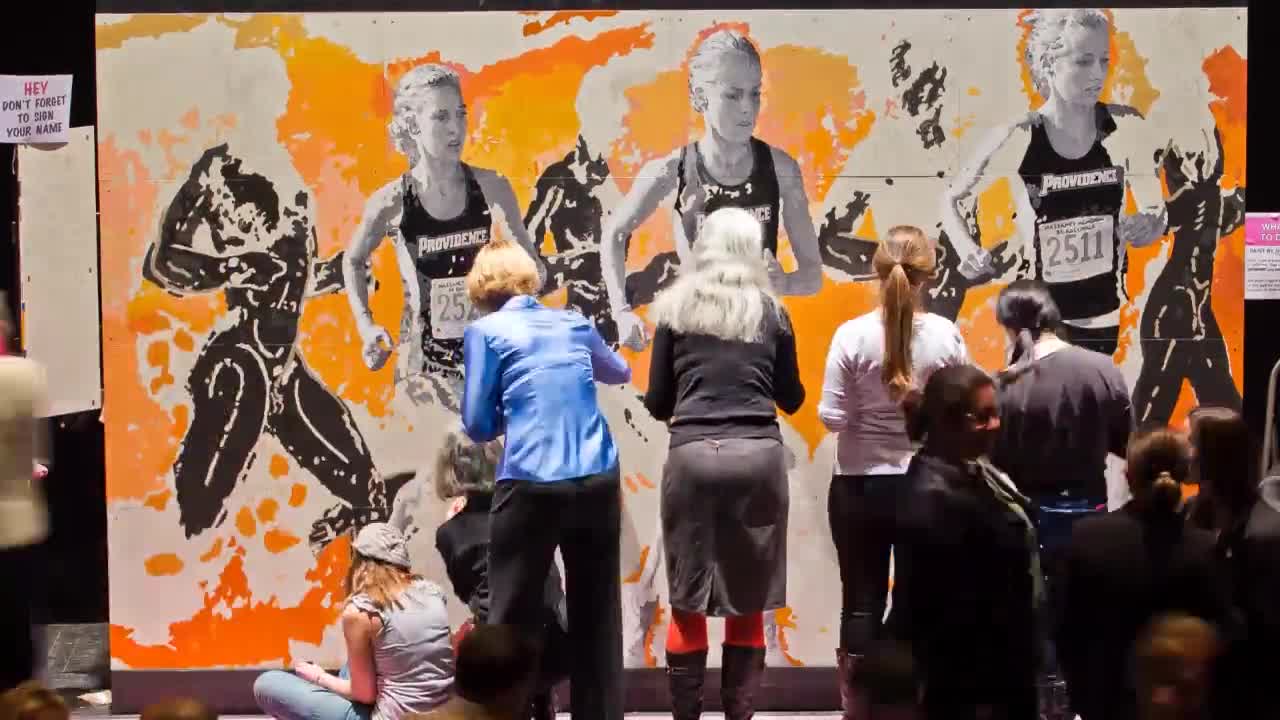 Mural Experience Captivates Alumni, Parents
Providence, R.I. -- Visitors to Alumni & Family Weekend at Providence College were stopped in their tracks by the sight of a giant mural being painted in the Ruane Atrium of the Concannon Fitness Center.
“It’s outrageous. It’s beautiful. I love it!” said Stephen Grupinski, who was accompanied by his daughter, Michelle Grupinski ’12 (Ronkonkoma, N.Y.)
Grupinski was one of hundreds of alumni, parents, students, and friends who couldn’t resist grabbing a small cup of acrylic paint and using his fingertips to dab it on numbered and lettered spaces on the mural, thereby leaving his own mark on Alumni & Family Weekend, which took place February 10-12.
The mural features three student-athletes -- Emily Sisson ’14 (Chesterfield, Mo.), Hannah Davidson ’12 (Saratoga Springs, N.Y.), and Laura Nagel ’14 (Napier, New Zealand). They were photographed during a cross-country competition by Dominic Channon ’13 (Nelson, New Zealand), an art student and member of the cross country team.
Channon’s photograph was adapted for the mural by Peter Tigler, an artist based in Santa Monica, Calif. Behind the image of the three PC student-athletes, Tigler added the image of three ancient Greek runners in the Panathenaic Games in Athens, taken from a vase dating to 333 BC.
“PC asked me to come up with a project that everyone could participate in,” said Tigler. “We put the ancient and the modern together and came up with this mural.”
SPORT:ART celebration
The project was part of PC’s SPORT:ART celebration, a two-month series of exhibits, lectures, films, and events exploring the ties that link sport, art, and identity. Also as part of SPORT:ART, Channon’s photograph is included in a student photography exhibit that will be on display in Hunt-Cavanagh Gallery through March 22.
Carole Ingallinera-Kunze ’86, a member of PC’s first women’s varsity soccer team, took time to paint the mural on her way to a reception commemorating the 40th anniversary of women’s athletics at the College. It was held in the Concannon Fitness Center as part of the weekend celebration.
“I’m not an artist, I’m an athlete, but this is very, very cool,” said Ingallinera-Kunze, who traveled to Alumni & Family Weekend with her husband, Stephen Kunze ’85. Their daughter is Lauren Kunze ’12.
Also trying her hand at painting was Emily Leary, the wife of College trustee William C. Leary, Esq. ’60 & ’10Hon.
“It was lovely, but I’m not very good at it,” said Leary. “I was like a child and I colored outside the lines. But it’s got my little touch on it, anyway.”
The mural, 7 feet tall and 12 feet wide, was a giant paint-by-number project. Tigler said it included about 24,000 tiny spaces and more than 60 shades of paint, including seven shades for the Greek runners, 14 for the student-athletes, and at least 40 for the background.
After the painting was complete, Tigler touched up the details and added varnish. Plans call for the mural to be on permanent display in the Ruane Atrium.
Tigler, who taught a master class on the mural process for the Department of Art and Art History, said he has created about three dozen such murals since 2002. It was his fourth mural at a college and his second in Rhode Island.
“People aren’t just coming to the event, they’re also making a memento of the event,” said Tigler. “Everybody participating in the weekend can leave their mark. And you can’t go wrong with finger painting.”
“It’s actually so much fun,” said Kerry Ann O’Connor ’14 (New Rochelle, N.Y.) “It’s such a unique idea.”
-- Vicki-Ann Downing
Music is "Autumn Day" by Kevin MacLeod

2 Days of Sun at Cardrona

Nike Commercial: Straight Down the Middle